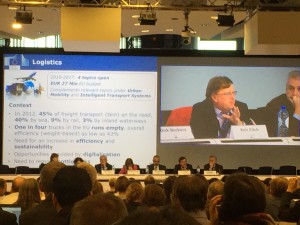 27 Million € are budgeted to support Logistics Research and Innovation Projects.

The specific logistics related topics in the 2016 and 2017 Work Program are:

MG 5.3 Promoting the deployment of green transport, towards Eco-labels for logistics. Coordination and Support Action (CSA). Available budget: 2 Million €. One Stage process. Deadline for proposal on 26th of January 2016.

MG 5.4 Potential of the Physical Internet.

Good news are that there is a commitment on giving the “Go” to 2nd Stage proposals to a number of proposal requesting overall not more than 3 times the available budget. This will increase success rate of 2nd stage proposals which was a demand by ALICE.

A number of members were also present and we had the chance to share views on the recently released Work Program 2016-2017 and associated calls.

All presentations of the Info Day are now on the event page. You can watch the event online as well.